PMCO 2019 is the global competitive season for PUBG MOBILE, the world’s highest grossing smartphone game, where up to 100 players parachute onto an island and scavenge for weapons and equipment in an intense fight of survival of the fittest. Since its launch in 2018, the game has grown to be immensely popular, with more than 400 million installs across more than 100 countries. PUBG MOBILE has also won numerous industry awards, including Google Play’s “Best Mobile Game of 2018”.

The inaugural Fall Split Global Finals of PMCO 2019 will be the largest mobile esports tournament to be ever held in the world to date. The event will see a total of 16 pro and semi-pro teams from 10 regions around the globe battling for the title of grand champion, and “chicken dinner” or prize pool of USD2.5 million. The Fall Split is the second season of PMCO this year, following the Spring Split that took place in Berlin, Germany at end-July. Together, both seasons represent the start of PUBG MOBILE’s esports ecosystem, providing an environment for skillful players to organically grow into professional teams.

16 Teams to Battle It Out for Total Prize Pool of USD2.5 million

The remaining regional finals and the available slots for each region are scheduled as follows: 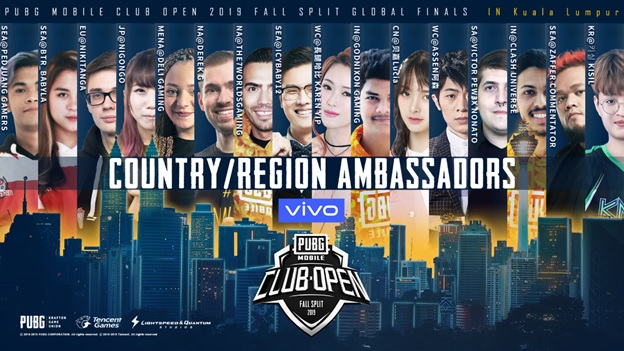 PUBG MOBILE is available to download for free on the App Store and Google Play. Leading global technology company, Vivo, is the official title sponsor of PMCO 2019, providing smartphones to empower players’ conquest at the competition with ultra-smooth gaming experience.