PUBG MOBILE brings back Vikendi, the first snow map in this battle royale game that most fans and community are longing for. Apart from Vikendi, a total of seven favorite and best game modes will make its comeback into the game, including the Metro Royale: Reunion, Titans: Last Stand, Survive Till Dawn, Payload 2.0, Runic Power, and Infection Mode. Vikendi was removed from PUBG MOBILE on April 7, 2021, with the release of Karakin map.

PUBG MOBILE players can now reminisce the following seven classic modes that will be brought back into the game:

After a long absence, the snow-covered battlefield has returned. The Vikendi map was first launched in 2018, offering a snowy map measuring 6 km X 6 km. Known as an isolated northern resort island in the Adriatic sea, Vikendi has a fairly high level hazard with extreme weather and heavy snow where blizzards can hit at any time.

Vikendi also introduced an exclusive snow vehicle, the Snowmobile, which players can use to dodge bullets or even race and drift for fun, as well as a weapon finish upgrade system, from looks to special effects that cope with Vikendi’s temperature and atmosphere.

As for battle strategy, players will need to remember to cover their footprint so that the enemy can’t track their location. Players will also need to equip themselves with tools that guarantee an adequate level of concealment. Such as, Assault Rifles, Sniper Rifles, and Designated Marksman Rifles would be the most suitable choices in the Vikendi terrain. On the other hand, Goroka, Dobro Mesto, Castle, Cosmodrome, Volnova, Villa, and Dino Park are player’s most favorite loot areas, so players will need to prepare themselves if they want to jump in those areas.

Experience tense battles in dangerous underground tunnels against bandits to ferocious mutants hiding in the shadows of darkness. To support intense battles, PUBG MOBILE has added a variety of tactical equipment in this mode, ranging from a thermal radar that can track body heat, goggles and night scopes to target enemies in the dark, various kinds of customizable armor attachments, grenade launchers that can be used to attack enemies in the dark, thick armor up to the Tikhar Rifle, a unique and silent air rifle.

PUBG MOBILE’s collaboration with the phenomenal box office film, Godzilla Vs Kong, is back. PUBG MOBILE invites players to join hands with the Monarch expedition team to defeat Mechagodzilla. Search for the godzilla Crates available on board and find the M249 and RPG-7 heavy guns with unlimited ammo to knock out Titans over 10-meters in size. Players will not be alone, Godzilla and Kong will appear to help. 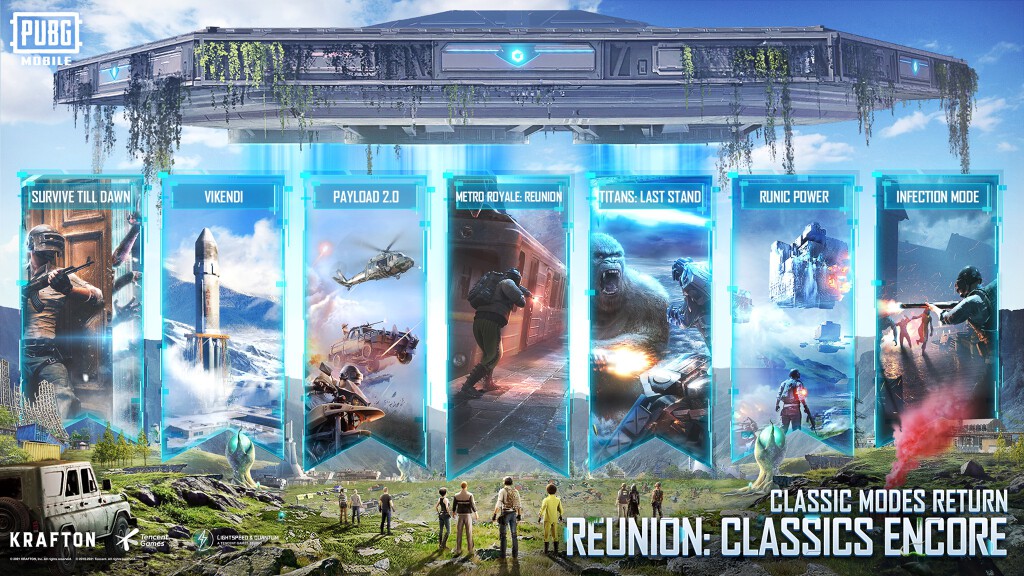 One of the most unique gameplay, Survive Till Dawn, is brought back this time. In this game mode, a swarm of zombies will start to appear and players will need to be ready to attack when the sun no longer sets. Players will experience survival until the allotted time by killing as many zombies as possible to get useful items and survive.

Get ready to “Rock and Load”, with the return of Payload 2.0 mode from 15 October 2021. Payload 2.0 provides a more intense, challenging, and exciting combat experience. Introduced two years ago, payload has become one of the most popular modes among PUBG MOBILE players. The game mode offers a new way of fighting, where players can use various kinds of powerful vehicles equipped with super weapons that have tremendous destructive power.

Runic Power mode brings back a unique experience of combat in Erangel. Players can pick one between three rune energies that will give players an elemental power as well as active and passive abilities. Firstly, the Flame Rune where players can summon a wheel of flame that rolls forward slowly, dealing burn damage to enemy players it touches. Meanwhile, with Arctic Rune, players can summon 3×3 ice walls for protection in the middle of battle. Finally, the Wind Rune, where players get the power of wind, can create a semi-transparent wind shield that reduces bullet damage from weapons fired from outside.

In this mode, players will be divided into two teams that are randomly divided to 5 players each, whether they will be a Zombies team or a Defenders team. In order to win this match, the Zombies team must be able to infect the entire Defenders team before the time limit runs out. On the other hand, for the Defenders team who can survive not being infected, even if only one person lives until the time limit runs out, they will be granted with a Winner Winner Chicken Dinner.

Play your favourite game mode now and stay tuned for other classic modes that will return to PUBG MOBILE.