*Mbps or Mega bits per second refers to the size of the pipe or how much data can move at one time. Where else speed is measured in latency/response time, not in bits per second

In Year 2014 specifically, the month of the highest bandwidth consumption was in November at 94,393 Mbps.

“Actually MyIX has noted this as a yearly recurring trend, whereby the highest internet consumption month is November. This could be reasonably be explained by a pattern attributed to the nearing of the year-end school holidays where parents and kids alike use the Internet more often for their studies, and parents are planning for annual yearend holidays as well as festival purchases,” explains Chiew.

He says that the start of this encouraging exponential demand for web connectivity was kick started by specific government initiatives such as MCMC’s Youth Communication Package (YCP) that was introduced in 2012, which made web content access much more affordable and easier for the country’s mass consumer market made out of the booming and Internet-hungry younger generation.

Chiew qualifies, “MCMC’s survey in 2011 showed that about 36 million phone users were subscribed in Malaysia in 2011; this rose to nearly 45 million by the end of 2014 with a 148.5 penetration rate per inhabitant. This shows that technically, the introduction of the YCP initiative helped to increase nationwide phone subscribers by 25 per cent.”

“In addition, the other factors that contribute to the increase of Internet consumption in 2014 include a greater prevalence of social media platforms and users from Facebook to Instagram; the use of applications such as MyTeksi and Uber; online game’s from Dota to Candy Crush; increased e-commerce purchases and more are some of the other contributing factors.”

Smartphone Access to the Internet
The 2014 Google Barometer report for Malaysia shows that 51 percent of Malaysians used smartphones to access the Internet; while 42 percent make online purchases via their mobile devices. Additionally, 73 percent of Gen-Y, or youngsters aged between 18 – 24 years, access the Internet on a daily basis. The second highest daily internet users group are those between the ages of 35 – 44 (63 per cent).

“Internet has now become a staple necessity for Malaysians and the government’s move to decrease the price of broadband connection by June 2015 is commendable. In order for more Malaysian’s to be able to access the internet, we welcome similar initiatives by the Government in the near future,” he adds.

MyIX Welcomes More Foreign Peering Partners
MyIX was set up in 2006 to allow Internet Service Providers (ISPs) to mutually peer with each other to keep the country’s Internet traffic domestic.

This ability is significant to the development of the Internet landscape as peering enables ISPs to talk to each other instead of previously, where data had to ‘travel out of the country and back’ for web content, making connectivity very expensive. Via peering, MyIX allows for the reduction of data traffic having to go through ‘international routes’ – thus driving down the prices of broadband continually over the last 9 years.

“MyIX has been peering with Facebook since 2012. We constantly monitor Malaysians Internet usage patterns and work with the relevant foreign players to ensure the internet surfing experience of the average Malaysian is better. A site that is peered to MyIX will load faster and this will mean that both the site and the users will benefit from an enhanced surfing experience,” explains Chiew in response to Jelutong Representative Jeff Ooi Chuan Aun’s concern on MYIX that was raised in parliament in regards to MyIX peering to Facebook.

“We hope more foreign players from social media sites to e-commerce platforms that are looking to increase their market reach in Malaysia, will contact us to peer locally to enable their Malaysian users to access their sites faster,” he ends. 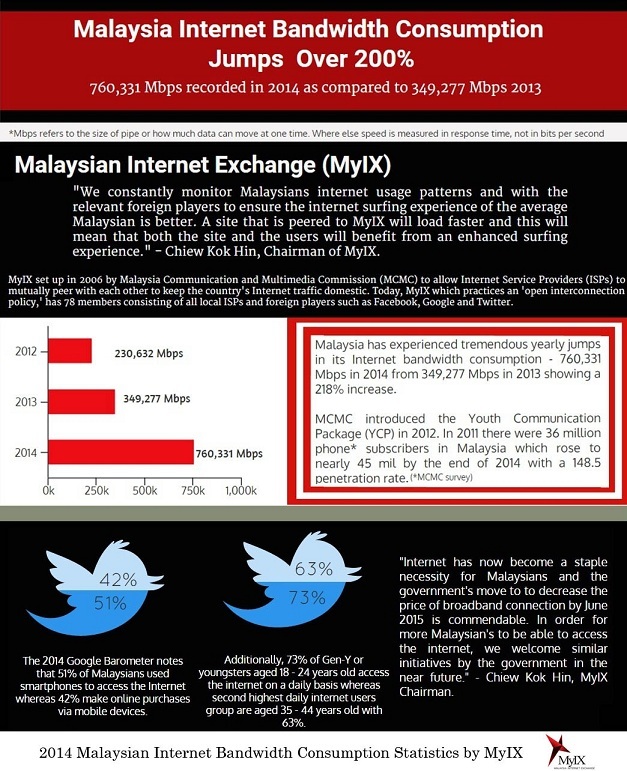