March 29, 2014 (Sat): Kaspersky Endpoint Security for Business, a platform to protect corporate users, received the highest score in testing conducted by the independent AV-TEST lab at the end of 2013. The tests evaluated the efficiency of different application control tools on offer to businesses.

Application Control is a progressive method, which provides information security by enabling only trusted and legitimate applications to run on a network. Illegitimate, non-work-related or hazardous programs are blocked. The legitimacy of any application is defined by “dynamic white lists” which are constantly updated by the developer. These may also be supplemented with lists of trusted applications created by the administrator.

Utilization of application control tools dramatically increases system security levels due to the fact that the vast majority of malicious programs simply cannot run unless they are on the “white lists”. This technology also greatly improves the stability of the IT infrastructure by reducing the costs of technical support and helps improve productivity of the employees by eliminating the launch of non-productive applications. Flexible monitoring tools enable effective control over the status of the system, reducing additional maintenance costs.

Application control enables the protection solution to block potentially dangerous applications even if they are not included in the databases of prohibited programs, as well as to detect legitimate software that has been attacked using exploits. In combination with the latest anti-virus technologies, application control provides maximum protection of a company’s network infrastructure.

Three vendors – Kaspersky Lab, McAfee and Symantec – submitted their corporate products for the AV-TEST testing. Bit9 and Sophos were also invited to take part in the trial but they refused. AV-TEST experts studied the capabilities of the solutions at all stages of their operation within the IT infrastructure: from implementing and configuring application control to monitoring the protection status and blocking threats on network computers.

Each stage was evaluated on three aspects: ease of use (ease with which administrators can deploy and maintain application control), functionality and the level of negative impact on the company’s business processes, as well as the user-friendliness.

According to the results of testing Kaspersky Endpoint Security for Business received the highest average score. AV-TEST experts noted Kaspersky Lab solution’s extraordinary ease of use combined with the most efficient system resources consumption. A set of diversified administrator functions, some of which are not offer by rival, provides high control flexibility and requires minimal training to gain maximum benefit.

“In the corporate environment, cyber-attacks can cause serious harm to any business and its reputation, so the network infrastructure of the organization needs reliable protection. Our technology can flexibly control applications on the corporate network, significantly reducing the risk of any cyber-attack – including those using previously unknown malware. The configuration procedure has been automated as far as possible, reducing implementation costs and ensuring that regular business processes are not affected. All these advantages of our application control are confirmed by AV-TEST. I can only add that using our application control we are developing a new “white list”-based approach to security which is proving to be one of the most effective protection methods,” said Vladimir Zapolyansky, Head of Product and Technology Intelligence, Kaspersky Lab. 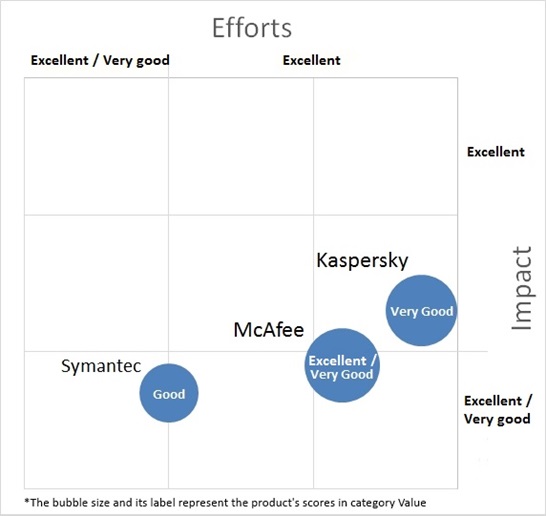 Kaspersky Lab regularly participates in independent tests performed by different test organizations. These tests confirm the superiority of its developments in the field of application control over the competitors’ solutions. In 2011 and 2012, such tests were carried out by West Coast Labs and Dennis Technology Labs respectively. In both cases, the Kaspersky Lab technology has proven its effectiveness in delivering application control.

When testing other aspects of protection against cyber threats, the company’s products also demonstrate its leadership: in 2012-2013 Kaspersky Lab solutions won more awards in independent testing than the security software of any other vendor.