April 2, 2014 (Wed): According to the data collected for Kaspersky Lab’s study ‘Financial cyber threats in 2013’, cybercriminals are trying harder than ever to acquire confidential user information and steal money from bank accounts by creating fake sites mimicking financial organizations. In 2013, 31.45% of phishing attacks were trading on the names of leading banks, online stores and e-payment systems, up 8.5 percentage points from the previous year.

Phishing is a fraudulent scheme used by cybercriminals to obtain confidential user data with the help of fake web pages imitating Internet resources. Unlike malicious software created for particular operating systems, phishing attacks threaten all devices, which can access web pages. That is why they are so popular with scammers – in 2013 alone Kaspersky Lab products protected about 39.6 million users from this cyber threat.

Phishing sites aimed at harvesting users’ financial details mainly use the brand names of popular online stores, e-payment systems and online banking systems. In 2013, the most attractive targets were banks, which were used in 70.6% of all financial phishing. That’s a sharp increase from 2012 when bank phishing represented just 52%. Overall, fake bank websites were involved in twice as many (22.2%) phishing attacks in 2013. 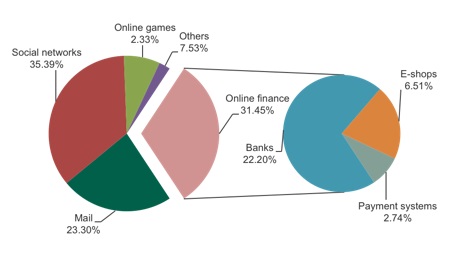 In 2013, Kaspersky Lab heuristic anti-phishing technologies blocked a total of 330 million attacks, an increase of 22.2% from the previous year.

Fraudsters use the brand names of major companies with large client databases in search of a big criminal profit. For example, about 60% of all phishing attacks using fake bank pages exploited the names of just 25 organizations. Among e-payment systems the phishers’ “favorites” are even more clearly defined: 88.3% of phishing attacks in this category involved one of four international brands: PayPal, American Express, Master Card and Visa.

For several years in a row Amazon.com has been the most popular cover for phishing attacks exploiting the names of online stores. Over the reported period its name was used in 61% of online trade-related phishing attacks. The Top 3 also included Apple and eBay, but both of them lagged well behind Amazon.

“Phishing attacks are so popular because they are simple to deploy and extremely effective. It is often not easy for even advanced Internet users to distinguish a well-designed fraudulent site from a legitimate page, which makes it even more important to install a specialized protection solution. In addition, phishing causes reputational and financial damage to organizations that see their brands exploited in phishing attacks,” commented Sergey Lozhkin, Senior Security Researcher at Kaspersky Lab.

The standard anti-phishing mechanisms in Kaspersky Lab security solutions for home users and small businesses are supplemented with Safe Money technology that reliably protects user data during online banking or payment sessions. The effectiveness of this technology is confirmed by special trials carried out by independent test labs such as AV-TEST, MRG Effitas and Matousec.

Companies which need to safeguard their clients from cybercriminals and to protect their own reputations may benefit from Kaspersky Lab’s comprehensive Kaspersky Fraud Prevention platform. It was developed to deliver rigorous, multi-layered security for online banking and includes programs for customer endpoints, a server solution to check customer transactions as well as a set of components to develop protected mobile applications.