PETALING JAYA: Today Kaspersky Lab published a new research report which identified an elusive cyber-espionage campaign targeting diplomatic, governmental and scientific research organizations in several countries for at least five years. The primary focus of this campaign targets countries in Eastern Europe, former USSR Republics, and countries in Central Asia, although victims can be found everywhere, including Western Europe and North America. The main objective of the attackers was to gather sensitive documents from the compromised organizations, which included geopolitical intelligence, credentials to access classified computer systems, and data from personal mobile devices and network equipment.

In October 2012 Kaspersky Lab’s team of experts initiated an investigation following a series of attacks against computer networks targeting international diplomatic service agencies. A large scale cyber-espionage network was revealed and analyzed during the investigation. According to Kaspersky Lab’s analysis report, Operation Red October, called “Rocra” for short, is still active as of January 2013, and has been a sustained campaign dating back as far as 2007.

Red October’s Advanced Cyber-espionage Network: The attackers have been active since at least 2007 and have been focusing on diplomatic and governmental agencies of various countries across the world, in addition to research institutions, energy and nuclear groups, and trade and aerospace targets. The Red October attackers designed their own malware, identified as “Rocra,” that has its own unique modular architecture comprised of malicious extensions, info-stealing modules and backdoor Trojans.

To control the network of infected machines, the attackers created more than 60 domain names and several server hosting locations in different countries, with the majority being in Germany and Russia. Kaspersky Lab’s analysis of Rocra’s Command & Control (C2) infrastructure shows that the chain of servers was actually working as proxies in order to hide the location of the ‘mothership’ control server. 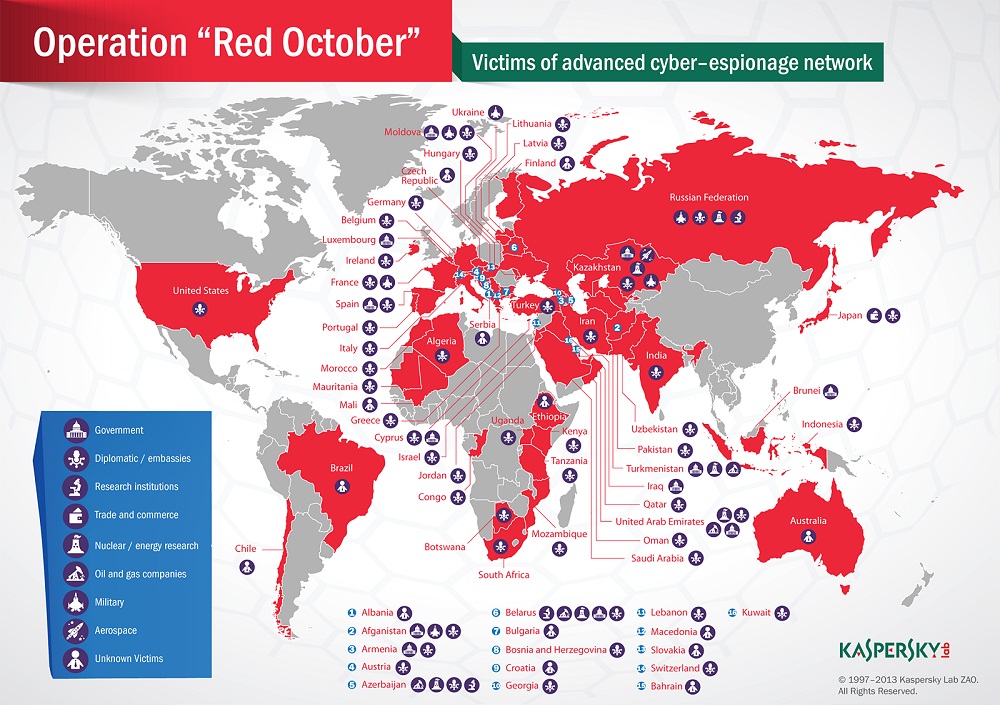 To infect systems the attackers sent a targeted spear-phishing email to a victim that included a customized Trojan dropper. In order to install the malware and infect the system the malicious email included exploits that were rigged for security vulnerabilities inside Microsoft Office and Microsoft Excel. The exploits from the documents used in the spear-phishing emails were created by other attackers and employed during different cyber attacks including Tibetan activists as well as military and energy sector targets in Asia. The only thing that was changed in the document used by Rocra was the embedded executable, which the attackers replaced it with their own code. Notably, one of the commands in the Trojan dropper changed the default system codepage of the command prompt session to 1251, which is required to render Cyrillic fonts.

Kaspersky Lab’s experts used two methods to analyze the target victims. First, they used detection statistics from the Kaspersky Security Network (KSN) which is the cloud-based security service used by Kaspersky Lab products to report telemetry and deliver advanced threat protection in the forms of blacklists and heuristic rules. KSN had been detecting the exploit code used in the malware as early as 2011, which enabled Kaspersky Lab’s experts to search for similar detections related to Rocra. The second method used by Kaspersky Lab’s research team was creating a sinkhole server so they could monitor infected machines connecting to Rocra’s C2 servers. The data received during the analysis from both methods provided two independent ways of correlating and confirming their findings.

The attackers created a multi-functional attack platform that includes several extensions and malicious files designed to quickly adjust to different systems’ configurations and harvest intelligence from infected machines. The platform is unique to Rocra and has not been identified by Kaspersky Lab in previous cyber-espionage campaigns. Notable characteristics include:

Attacker identification: Based on the registration data of C2 servers and the numerous artifacts left in executables of the malware, there is strong technical evidence to indicate the attackers have Russian-speaking origins. In addition, the executables used by the attackers were unknown until recently, and were not identified by Kaspersky Lab’s experts while analyzing previous cyber-espionage attacks.

Kaspersky Lab, in collaboration with international organizations, law enforcement agencies and Computer Emergency Response Teams (CERTs) is continuing its investigation of Rocra by providing technical expertise and resources for remediation and mitigation procedures.

Kaspersky Lab would like to express their thanks to: US-CERT, the Romanian CERT and the Belarusian CERT for their assistance with the investigation.

The Rocra malware is successfully detected, blocked and remediated by Kaspersky Lab’s products, classified as Backdoor.Win32.Sputnik.

Read the full research report of Rocra by Kaspersky Lab’s experts at Securelist.com.