19 March 2021 (MY) – To celebrate the upcoming PUBG MOBILE 3rd Anniversary on March 21, a fresh wave of updates is arriving in the game including music themed gameplay, new firearm, vehicle, Metro Royale new chapter and more festive celebration content. Now, players can turn up the jams and chicken dinners with the PUBG MOBILE Version 1.3 content update, available for free via the App Store and Google Play.

Version 1.3 content update introduces an electronic music festival in-game as the celebration of PUBG MOBILE 3rd Anniversary. In this version, players can drop into the all-new music-themed game mode “Hundred Rhythms” in the beloved Erangel map. When players queue for the new variant, they will be prompted to choose one of three special armbands on Spawn Island, which boast unique in-game powers. The armbands each offer one core active ability boost, and can upgrade with two passive boosts by collecting cassettes throughout the map.

The three “Hundred Rhythms” armband skills are Guardian Armband, Recon Knight Armband and Survivor Armband with descriptions are as follows:

Additionally, PUBG MOBILE’s Version 1.3 updated features also include: Mosin-Nagant, a 7.62mm bolt-action sniper rifle that is as powerful as the Kar98K, but it’s bullets fly faster and have less damage drop-off. It can knock out an unarmored enemy with a single shot from a long distance. The Mosin-Nagant will spawn on Erangel and Vikendi, replacing some of the Kar98K rifles. Motor Glider, players can now traverse Erangel and Miramar from the skies in this two-seat aerial vehicle that consists of a front seat for the pilot and a back seat where passengers can shoot from. To take off, the Motor Glider must gain enough speed, and then the pilot must press the ascend button to raise the nose. The Motor Glider uses fuel based upon its engine speed. Lastly, Metro Royale Update that reveals a new chapter “Uncover” in Metro Royale mode, while Metro Exodus monsters and Tikhar Rifle are removed. At the start of the new chapter, player rankings, honor levels, and inventory will be reset. New honor rewards released, including AG, permanent finishes, and other cool rewards. Extra elite enemies will suddenly appear on the battlegrounds, which can be defeated for great rewards. More AI and equipment balancing adjustments made.

Meanwhile, preheating the 3rd Anniversary Celebration in March, PUBG MOBILE also released its first CG movie titled The Growth along with the 1.3 content update. The movie recaps the growth process of common players in the world of PUBG MOBILE, available now in game and here. Stay tuned for more details about the upcoming PUBG MOBILE 3rd Anniversary celebration, including Royale Pass Season 18 update and more to expect. 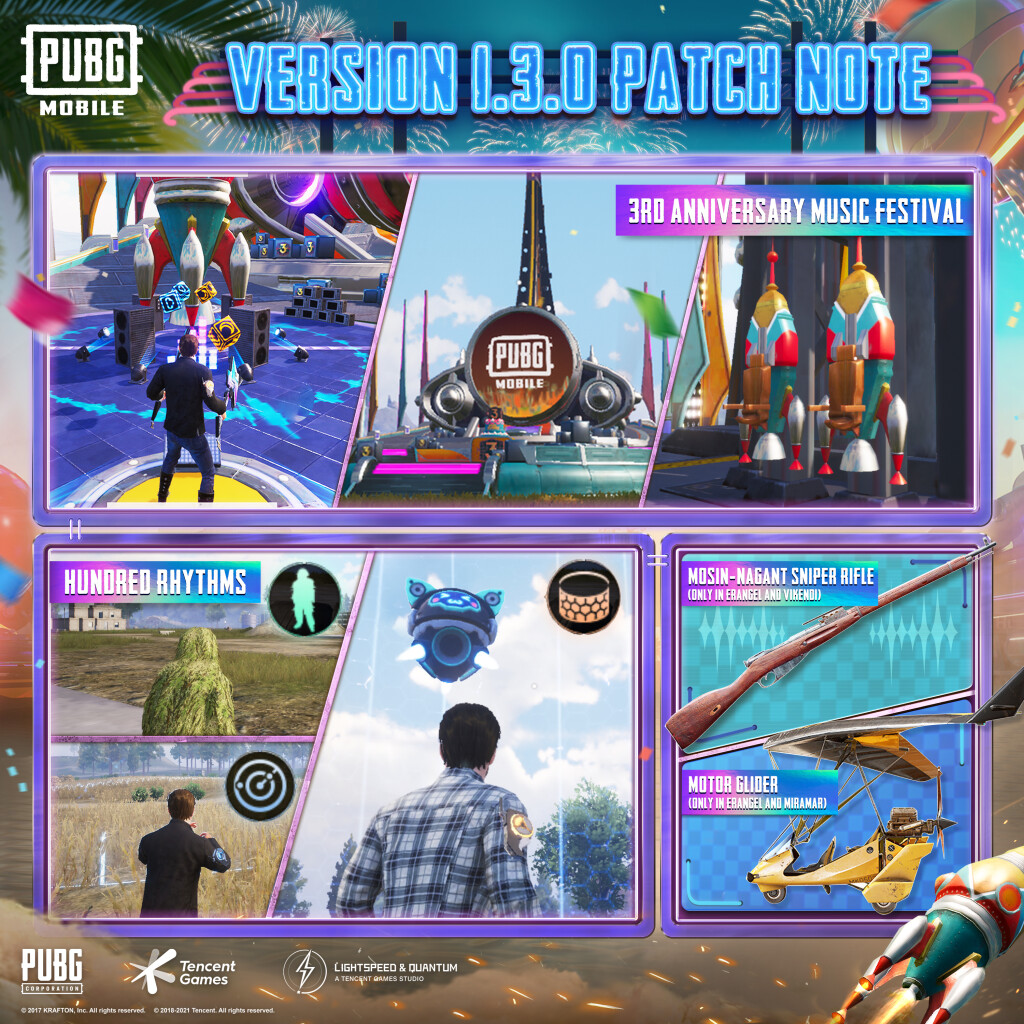