Aug 15, 2013 (Thu): A snippet of code on the Central Tibetan Administration website redirects CN speaking visitors to a Java exploit that drops an APT-related backdoor. For some context, the site claims the administration itself as “…the Central Tibetan Administration (CTA) of His Holiness the Dalai Lama, this is the continuation of the government of independent Tibet.” The selection of placement for the malicious code is fairly extraordinary, so let’s dive in.

The attack itself is precisely targeted, as an appended, embedded iframe redirects “xizang-zhiye(dot)org” visitors (this is the CN-translated version of the site) to a java exploit that maintains a backdoor payload. The english and Tibetan versions of the website do not maintain this embedded iframe on the Chinese version (please do not visit at this time). At this point in time, it seems that the few systems attacked with this code are located in China and the US, although there could be more. The Java exploit being delivered is the 212kb “YPVo.jar” (edd8b301eeb083e9fdf0ae3a9bdb3cd6), which archives, drops and executes the backdoor as well. That file is a 397 kb win32 executable “aMCBlHPl.exe” (a6d7edc77e745a91b1fc6be985994c6a) detected as “Trojan.Win32.Swisyn.cyxf”. Backdoors detected with the Swisyn verdict are frequently a part of APT related toolchains, and this one most certainly is.

The Java exploit appears to attack the older CVE-2012-4681 vulnerability, which is a bit of a surprise, but it was used by the actor distributing the original CVE-2012-4681 0day Gondzz.class and Gondvv.class in August of last year. You can see the 4681 exploit code in the image above along with code setting the jvm SecurityManager to null to disable Java’s policy checks and then running thePayload.main method. The Payload.main method contains some interesting but simple capabilities that enable an attacker to download the payload over https and AES decrypt it using Java’s built-in AES crypto libraries, but the package is not configured to use that code in this case. Instead, a couple of lines in its configuration file direct the exploit to drop and execute the jar file’s win32 exe resource. The backdoor itself is detected by most of the AV crowd as variants of gaming password stealers, which is flatly incorrect. The related C2 is located at news.worldlinking.com (59.188.239.46).

This threat actor has been quietly operating these sorts of watering hole attacks for at least a couple of years and also the standard spearphishing campaigns against a variety of targets that include Tibetan groups. Our KSN community recorded related events going back to at least a busy late 2011 season. We also show Apple related Java exploits from this server targeting the more recent CVE-2013-2423. 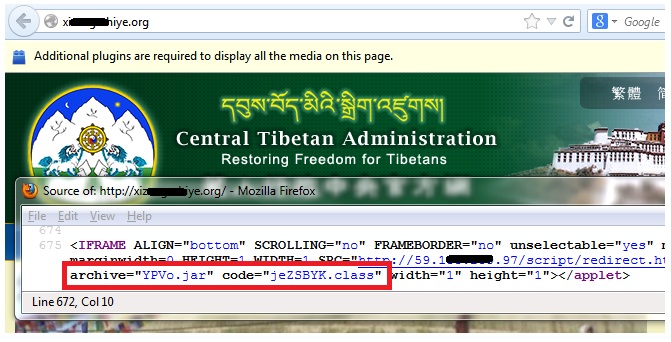 UPDATE 2013.08.13: The CN version of the site at “xizang-zhiye(dot)org” appears to be cleaned up and has not been serving any malicious code that I can find over the past day. The administrators appear to have cleaned everything up on early Tuesday their time/later Monday “western” time and there are no indications of any return since. We will continue to monitor the site for signs of compromise.