China’s leading e-payments provider Alipay has introduced Alipay Wallet mobile app, allowing its customers to electronically store and manage credit cards, gift cards and discount coupons and to purchase good and services in shop via Android platform smart phone. It is an upgrade version of the Alipay client app for mobile phone which was introduced in 2009 and has been downloaded more than 50 million times.

One of the key features in this newly launched app is Online-to-Offline (O2O) payments which allow users to electronically transfer funds via the Internet, through barcode recognition and QR code recognition. The app also unveils another new feature called “sound wave payment,” which utilizes white noise generated by one smart phone to carry digital information to another Alipay Wallet-equipped smart phone in the vicinity.

According to Alipay, its wireless-payment system increased 546 per cent together with 223 per cent increase of its user base in 2012 compared with 2011. This show the consumers are keen to use their mobile phones for e-commerce. However, Alipay said mobile wallet still can’t replace consumers’ actual wallet. 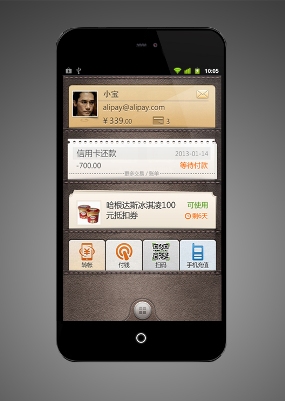