SMBs Should Go For Digital Payments, More Than 1 In 2 Of SEA Users Say

Home » Fintech » SMBs Should Go For Digital Payments, More Than 1 In 2 Of SEA Users Say

More than half of e-finance users (67%) in Southeast Asia (SEA) believe that small and medium businesses (SMBs) should begin using digital payments for financial transactions. This is one of the findings of a study on 1,618 people conducted by cybersecurity company Kaspersky in a bid to identify the attitude and challenges of digital payment users in the region. 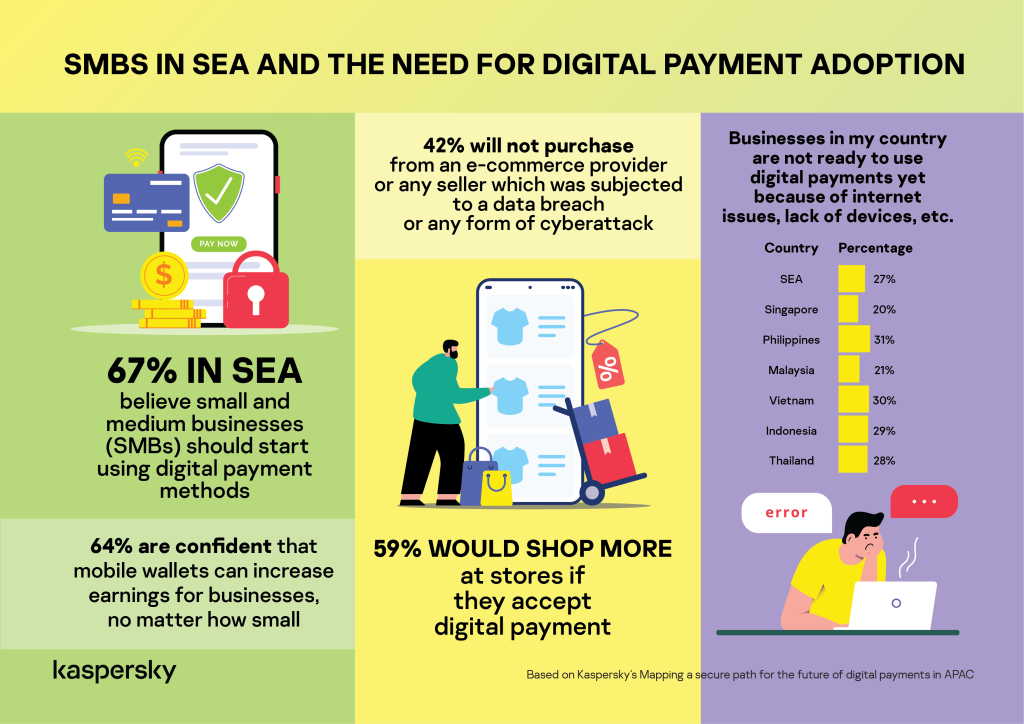 Among the countries in SEA, consumers in Malaysia (72%) strongly favored the SMB’s adoption of digital payment systems, followed by Singapore (68%) and the Philippines (68%).

The demand for contactless payment systems is unprecedented and reflects the projected trajectory of rising e-commerce spending by 162% or U$179.8 billion by 2025 with digital payments accounting for 91% of the transactions, according to research company IDC.

The survey showed an overall belief (64%) among the respondents that mobile wallets can even positively boost businesses by increasing their earnings. Thailand is the most confident with this idea (71%) followed by Malaysia (68%) and Vietnam (64%).

According to the study, the frequently used forms of digital payment among SEA consumers are:

Nearly three in five (59%) of respondents said that they would shop more at stores that accept digital payments. Malaysian consumers (70%) are the most inclined to do so followed by Vietnam (63%) and the Philippines (59%).

For the respondents across the region, their top three reasons for being familiar and comfortable around these technologies are its convenience, ease of access and privacy.

Interestingly, users here are also aware of the issues that hamper SMBs in embracing this technology. More than a quarter (27%) of the total respondents said admitted that local businesses are not ready to use digital payments yet because of internet issues and lack of devices.

However, it’s a different matter when an e-commerce provider or seller is subjected to a cyberattack. The survey showed that the confidence of consumers to shop at stores that suffered data breaches dropped by 42% in general.

“It is worthy to note that while consumers are embracing the digital lifestyle and trusting these tools that make their financial transactions smooth and fast, they are also starting to gain an awareness of the dangers and risks of cyber threats in their personal lives,” said Yeo Siang Tiong, general manager for Southeast Asia at Kaspersky.

“To put things in perspective, the cost of data breaches in SMBs rises by 54% but with early breach detection, the average losses would go 17% lower. The SMBs are now in a position to speed up their digital transformation. The radical changes to the demands and expectations of consumers can no longer be ignored or else, they might decide to bring their business elsewhere. I would venture to advise SMBs right now to act and ride the wave, so to speak,” Yeo added.

Given the need for cash flow as SMBs across the region try to recover after two years of the health emergency, Kaspersky offers discount for its Kaspersky Endpoint Detection and Response Optimum here: https://go.kaspersky.com/SEA_SMB_Promo_KERO.html?utm_campaign=SEA21Q2KERO.

Experts from Kaspersky also has the following tips for SMB owners in SEA: