Nov 7, 2013 (Thu): Children love the Internet – but sometimes that can come at a price. And often it’s mum and dad who end up footing the bill for their kids’ online blunders. Almost 1 in 5 parents have lost either money or important personal data due to their children unmonitored computer use, according to a summer 2013 survey carried out by B2B International and Kaspersky Lab.

What exactly are your children up to? The question is more pressing than ever in this age of widespread Internet access via computers, smartphones and tablets. Online there are no borders or boundaries: if you can use a computer you can reach all kinds of sites – and our children are often at least as tech-savvy as their parents. However, not everything online is suitable for youngsters, and while the web is a valuable source of education and entertainment it is also home to some alarming threats.

The recent B2B / Kaspersky Lab survey found that about 27% of parents feared their children had been at risk on the Internet at least once over the last 12 months. About 11% of that surveyed reported that children had faced inappropriate content and 7% of respondents had evidence that their offspring had contacts with strangers.

About 10% of respondents reported that their children had accidentally removed important data from their PCs and 5% of children had inadvertently shared this data with others. Similar numbers admitted they had been stung by an unexpected bill for online purchases after children got access to their parents’ accounts in App stores. In total 18% of families reported financial costs or lost data due to their children.

These results show that children and their parents face serious risks on the Internet, and prove that special measures are needed to avoid them.

Parents are usually busy at work or at home so they can hardly keep track of everything that their child is doing on the Internet. However, any parent can delegate this task to reliable technology that will protect the child against all Internet threats. Parental Control, incorporated in Kaspersky Internet Security for Windows and Kaspersky Internet Security for Mac, includes the necessary technologies. 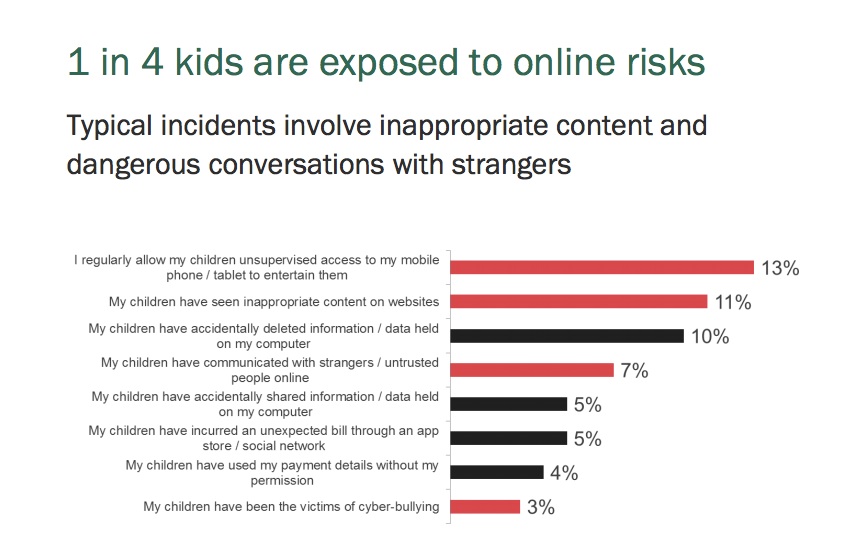