Q-Lab to Join the Top Ranks of Software Testing Facility

Sept 3, 2013 (Tuesday): The Q-Laboratory, an advanced software testing facility, is set to join the ranks of globally recognised top-level testing laboratory with its impending Level 5 certification by the TMMi Foundation.

This was revealed at the official opening of inaugural SOFTEC Asia 2013 conference, held in Petaling Jaya today. The four-day regional conference on software testing is hosted and organised by the Malaysian Software Testing Board (MSTB) under the auspices of Malaysia Software Testing Hub (MSTH),

Pending the official ratification by TMMi Foundation, the Q-Laboratory (Q-Lab) will be only the third software testing facility in the world to be certified at Level 5 – the highest certification under the Test Maturity Model integration (TMMi) model

TMMi provides a framework for assessing the maturity of the test processes in an organisation, and so providing targets on improving maturity. It is developed and managed by the TMMi Foundation. The Q-Lab has been assessed to TMMi Level 5 by United Kingdom-based accredited TMMi assessor Experimentus Ltd in August 2013.

The Q-Lab was established at an initial cost of RM11 million under MSTH initiative, a Public-Private collaboration aimed at developing the software testing industry as a new source of economic growth for the nation. The Q-Lab and was officially opened in 2010 and since then, it has steadily gained recognition from the domestic and international software testing fraternities. The Malaysian Software Testing Board (MSTB) is entrusted with the task of planning and implementing MSTH programmes.

SOFTEC Asia 2013, meanwhile, was officially opened by Minister in the Prime Minister’s Department Dato’ Seri Abdul Wahid Omar. SOFTEC Asia 2013 is being held at the Sunway Resort Hotel and Spa from 2nd to 5th September.

The conference featured 25 international speakers and over 40 presentations which include Keynote addresses as well as Plenary, Tutorial and Workshop sessions. SOFTEC Asia 2013 also features dedicated tracks for Chief Information Officers (CIO) and the Academic groups. In conjunction with the conference, MSTH is also hosting the Asia Software Quality Network (ASQN) track and Board Meeting.

Dato’ Seri Abdul Wahid, in his speech, expressed his confidence that based on the progress being made under the MSTH initiative, Malaysia is well-poised to make its mark as a global destination for software testing services.

He also stressed the importance for organisations to mind the quality of software they deploy and adopt good software testing practices due to high-dependency of businesses on software-driven systems.

“It is in the best business interests for organisations to have their software properly tested,” he said, adding that flaws in software could cost businesses dearly both in terms of direct and indirect monetary losses.

The scheme has been designed to help Malaysian software producers to obtain independent and recognised quality endorsement on their product, thus, help enhance their competitiveness internationally. At the same time, buyers may use the certification as the quality benchmark for their software purchases.

SOFTEC Asia 2013 is being held on a regional level for the first time and is it set to be the biggest English-medium software testing event in Asia. In terms of size, Japan and Korea have bigger events but they are conducted in the host countries’ national languages.

MSTB has been organising SOFTEC as a national-level conference since 2008 and the event has attracted growing interests from other Asian countries over the recent years. Elevating SOFTEC to a regional-level is a natural expansion of geographical coverage for the conference.

SOFTEC Asia 2013 has adopted the theme of ‘Test the Walk’. the theme encapsulates a focus on ensuring that Malaysia is moving in the right direction as the country continues to pursue software quality excellence through learning from the wealth of experience and knowledge of SQA experts and thought leaders from around the globe.

Moving forward, the national- and regional-level SOFTEC will be held in alternate years. 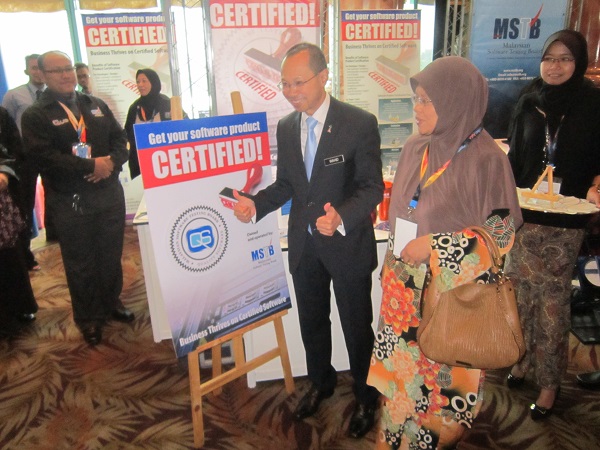