October 23, 2014 (Thu): PIKOM, the National ICT Association of Malaysia, on Tuesday held its 28th Annual General Meeting (AGM) at The Royale Chulan Damansara to announce its new Chief Executive Officer and Council 2014/15 to support the association in achieving stronger growth for the local ICT industry.

“Woon brings with him over 28 years of distinguished experience in various fields such as ICT, business development & management, corporate affairs, branding, advertising and marketing to name a few. With his extensive and well-rounded experience in the industry, I believe that Woon would lead the association to continue creating greater values to our members.”

Cheah adds, “In this role, Woon will champion PIKOM’s mission as the ‘Voice of ICT industry’ and head the management of the Association. He will play a critical role in the day-to-day operations such as enhancing the relationship with our stakeholders, upholding the interest of our members as well as providing his foresights on gearing PIKOM to achieve greater heights.”

During the AGM 2014, Cheah also shares that the association is heightening its values to members via the execution of its 5-year strategic plan— which is specially designed to strengthen the existing state of Malaysia’s ICT sector to achieve the RM 95 billion revenue target by 2017.

Cheah adds that, with the trust and support by its members, the current PIKOM’s Council has achieved several transformations on PIKOM’s flagship activities in the first year of this tenure.

“One of the key milestones includes the rebranding of PC Fair to PIKOM Fair to cover a wider range of ICT-related products and services. This has enabled greater participations of business users and enterprises, while fulfilling the existing consumer demands on technology products.”

He continues, “The 6th PIKOM Leadership Summit (PLS) was another successful event organized to engage local business leaders and regulators. PLS is now the thought leadership platform for sharing of business IT evolutionary trends which had significant impact on the country’s economy.”

“In the last one year, PIKOM also observed closely on the challenges in the ICT industry as well as opportunities available. The association had been proactively engaging the industry players and government to address concern areas, which include the current preparation for GST implementation, knowledge and skilled ICT talent development, and the identification of new trends such as the ‘Internet of Things’ and market opportunities.”

Moving forward, PIKOM will also be launching the individual PIKOM membership. Cheah explains, “There are over 400,000 ICT professionals in the country and there is only little engagement among them. This is a great platform for individual ICT professionals to gather and share ideas among each other. We strongly encourage ICT fresh graduates to join us so they could get a better understanding on the industry as well as to equip themselves with the skills in demand.”

Cheah ends, “Besides PIKOM’s excellent networking value, we are looking to provide value extension to our members via sharper market updates, feedback, reports and surveys – all put together so that our members can benefit from a deeper and clearer representation of the local ICT sector. ‘Ask not what the members can do for PIKOM, but instead ask what PIKOM can do to better serve our members’.”

The 28th AGM saw Cheah Kok Hoong continues to be the incumbent chairman and lead the association in future endeavour for ICT industry development. The election also took place to vote on the Council termed for 2014/2016. Four (4) new Councillors have been elected to join the four (4) existing Councillors to serve a two-year term. 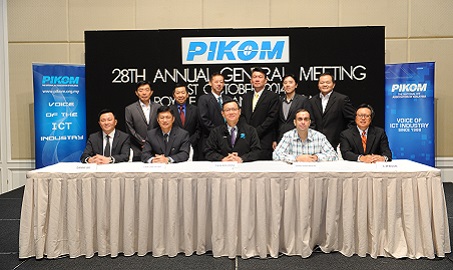