OOPS: Every 1 In 2 Phishing Attempts In Malaysia Are Finance-Related

Home » Malaysia » OOPS: Every 1 In 2 Phishing Attempts In Malaysia Are Finance-Related

Payment system remains most targeted by financial phishing attempts in Malaysia. Kaspersky’s fresh data revealed that March recorded the highest detections of this threat at 41.09%. 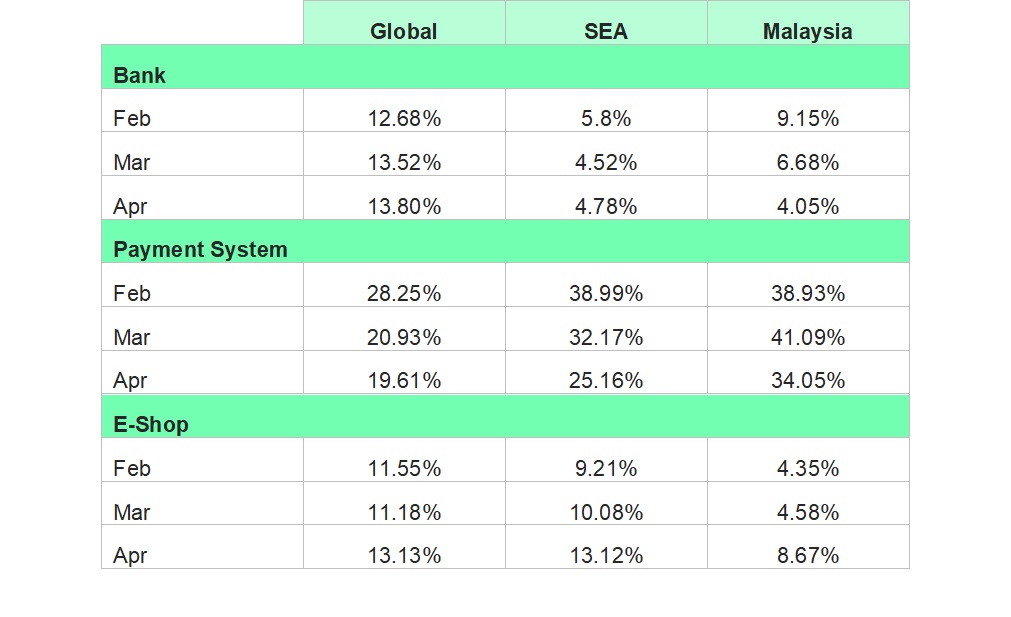 The percentages are from anonymised data based on the triggering of the deterministic component in the Kaspersky’s Anti-Phishing system on user computers. The component detects all pages with phishing content that the user has tried to open by following a link in an e-mail message or on the web, as long as links to these pages are present in the Kaspersky database.
Banking and payment system phishing attempts may have been lower since the April 1, 2022. This was the announced start of Malaysia’s border reopening to international travellers, as well as for Malaysians to travel abroad without the need to quarantine.

However the online shopping phishing attempts went up in April to 8.67%, with the possibilities of many looking into online deals that may have promised lucky draws.

“Alongside the increased adoption in digital transactions here in Southeast Asia, we also see the rise of “Super Apps” in the region. These are the mobile applications that combine all popular monetary functions including e-banking, mobile wallets, online shopping, insurance, travel bookings, and even investments. Putting our data and digital money in one basket can trigger an aftermath snowball, with the impact of a phishing attack swelling at an unforeseeable rate,” says Yeo Siang Tiong, General Manager for Southeast Asia at Kaspersky. 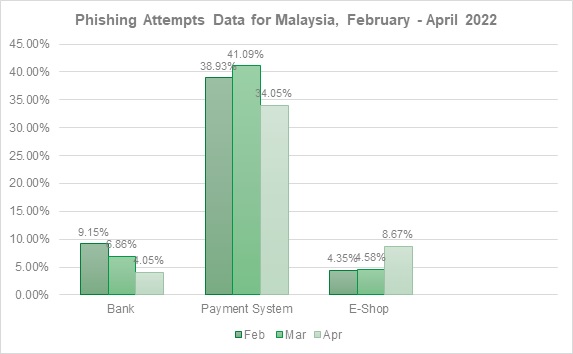 Super Apps are traditional banks and service providers’ way of standing out in a rather crowded industry. As they try to work with third parties and incorporate their services into a single mobile app, the attack surface expands, opening up more doors of a malicious exploit.

Phishing has remained to be the most effective trick on cybercriminals’ sleeves. It is a known way to crack into a user’s or even a company’s network by playing on a user’s emotions.

A possible scenario is given that one app has all the financial details of a user, a simple phishing link asking for the user’s credentials can compromise all the data available in the app. This magnifies the possible damaging effects of this threat.

“It is known that cybercriminals follow the money trail, so it is important for banks, app developers, and service providers to integrate cybersecurity from the beginning of application development. We expect hackers to target the rising “Super Apps”, both its infrastructure and its users through social engineering attacks. We urge all fintech companies to deploy a secure-by-design approach in their systems and to continuously provide proactive education for their users in this period where phishing attacks continue to thrive,” adds Yeo.

While security systems are in place in most financial companies to protect customers from falling victim to suspicious activity, it is a truth that prevention is better than cure; much more can be proactively done at both the individual and bank level.

For enterprises, the most important method of protection is to keep in mind that cybersecurity should be a “living” strategy, not a static platform. This will blend technology and effort, and is constantly upgraded, updated and improved.

To start, firms can invest in endpoint security solutions. Kaspersky currently offer its Endpoint Detection and Response Optimum at 35% off to help enterprises get started with. Interested companies can visit this link to know more.
Some more crucial steps to consider also include:

Some things to keep in mind that can help individuals protect themselves against phishing attacks include: