Oct 29, 2013 (Tue): Malaysian Internet Exchange (MyIX) or also known as Persatuan Pengendali Internet Malaysia’, today announced that they will be investing up to RM3.7 million to increase the bandwidth capacity of its central nodes interconnection in Klang Valley, from 10 Giga bits per second (Gbps) to 40 Gbps.

MyIX Chairman, Chiew Kok Hin says, “When we started in 2006, internet traffic consumption in Malaysia was only at 288 Megabits per second (Mbps) and a 10,000 Mbps capacity for the central node interconnection was more than sufficient.

Today this has grown to a staggering figure of 26 Gbps in combined traffic (as at June 2013), resulting in an 80 per cent capacity utilisation per leg of MyIX’s existing central node infrastructure. “This is the main driver why we are upgrading our infrastructure – which is approximately by 300 per cent more bandwidth capacity, to cope with the anticipated growth of the country’s Internet consumption over the next two years.”

Chiew attributes this exponential growth to more social networking and smart phone usage, the digitization of Malaysian TV with the IPTV trend, video-on-demand, online gaming – all of which drives more digital content which flows through Internet network connections to these users.

“One of the key factors for data traffic growth is the increased number of people surfing on the Internet via mobile devices such as smart phones and tablets. In fact, the first experience for many young Malaysian users of the Internet is via these mobile devices. The Internet penetration level will continue to escalate in the next few years as smartphones bundled with attractive communication packages become more affordable for the average Malaysian,” he adds.

MyIX is a non-profit organization set up in 2006 under the purview of the Malaysian Communication and Multimedia Commission (MCMC) to oversee the operations of the national Internet traffic exchange to facilitate the mutual peering between local Internet Service Providers (ISPs) that enable a more efficient and cost-effective transmission of inter-ISP content.

“MyIX keeps the entire Internet traffic domestic, without having to travel overseas across long connection distance which adversely affects the Internet experience of local users. MyIX has definitely contributed significantly to making Internet connection cost much more affordable as ISPs can pass on their savings to their customers – who can also enjoy better experience when surfing, playing online games and file sharing. Voice and video applications that are latency-sensitive have also seen a visible usage improvement with overall higher quality Internet coverage in Malaysia,” shares Chiew. 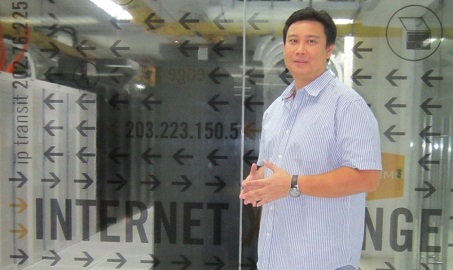 MyIX has also been working to peer directly with top global content providers and social media platforms worldwide such as Facebook, Amazon and Microsoft in order to improve the experience of the many Malaysians who access these popular sites.

Earlier this year, MyIX decided to peer with Facebook. Reason being that 13.3 million, or 45.5 per cent of the total population of Malaysia are Facebook users – putting the country at the 8th spot in Asia and 21st place worldwide in terms of country with highest Facebook account holders.