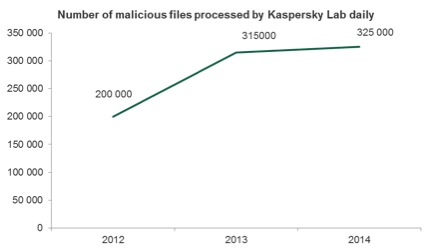 Every day more than 1.6 million different files are processed through Kaspersky Lab’s Anti-Malware Research team. Almost 20% of these, that is to say one in five, is dangerous. There has been a 3.17% increase in the numbers of malicious files detected this year compared with the 2013 figure. The previous 12-month period, from 2012-2013, saw a growth of more than 50% as the Anti-Malware Research team’s workload went from 200,000 to 315,000 malicious files per day. According to Kaspersky Lab’s experts this sharp reduction in the growth rate reflects the significant change in tactics that malicious users are now deploying to infect PCs.

“We are now observing a very interesting trend in the malicious landscape. More and more often criminals use spear-phishing emails: spam email targeting a very specific group, such as gamers or online banking users. Previously this technique was almost exclusively used by advanced threat operators but now spear-phishing has been commercialized for use by less skillful cybercriminals. This allows them to perform less massive and less noticeable attacks. However our security solutions consistently detect these types of attacks,” said Vyacheslav Zakorzhevsky, Head of the Anti-Malware Research team at Kaspersky Lab.