PETALING JAYA: The traffic of email spam decreased steadily throughout 2012 to hit a five-year low with the average for the year stood at 72.1 per cent compared 80.3 percent in 2011, according to Kaspersky Lab data.

The implementation of spam filters in every email system was one of the reasons behind this. Besides, some email providers have introduced mandatory DKIM signature policies (digital signatures that verify the domain from which emails are sent) to combat email spam. However, the traffic of emails with malicious attachments fell only slightly to 3.4 per cent. Most of emails with malicious attachment were detected in US, Germany and UK last year. 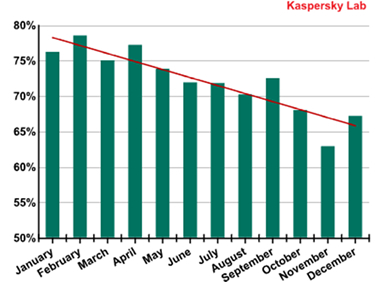