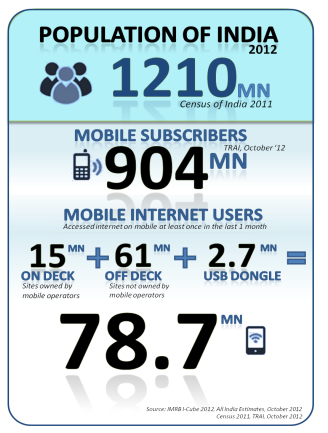 According to the recent Mobile Internet Report by Internet and Mobile Association of India (IAMAI) and Indian Market Research Bureau (IMRB), India had 87.1 million mobile internet users in December 2012 and this figure is expected to hit 164.8 million by March 2015. The report said that 78.7 million mobile users accessed the Internet in the last one month in October 2012.

Most of the users found access Internet on mobile device to send or receive emails, communicate as well as checking social networking web, access app stores and watch online videos.

For more the details, you can download the report here.