28 December 2020 (MY) – The world-wide esports competition, PUBG Mobile Global Championship (PMGC) League stage, has just ended last Sunday night (12/20/2020), crowning the Chinese team, Four Angry Men (4AM) as the first spot. On the second place as runner-up, Bigetron Red Aliens (BTR) from Indonesia received a prize of $ 125,000 USD, while 4AM team as the League champion was entitled to a prize of $300,000 USD and directly qualified for the Grand Finals which will be held in Dubai at the beginning of 2021, along with 15 other teams, including Team Secret from Malaysia.

The biggest tournament in PUBG MOBILE’s history, PMGC Season Zero, has 24 professional teams competing across the world for 4 weeks from 24 November to 20 December 2020 with 108 matches. A total of 24 teams had to compete and show their best performance until the last match in the PMGC League stage in order to be the best 16 teams that qualify to the grand finals and fight for the largest total prize pool in the history of mobile gaming, that is USD$2 million.

4AM’s journey to reach the top was not easy, they had to compete intensely with the Indonesian team, Bigetron Red Aliens. Their victory was finally determined in the Super Weekend tournament last week with a 70 points difference, where previously the first position continued to be occupied by the BTR team until Super Weekend – Week 3. One of the 4AM players, 33Svan received the title League MVP and won a money prize of USD$10 thousand. In this competition, all teams presented a real world-class competition, that entertained millions of fans and community who watched the live streaming on the official PUBG MOBILE YouTube channel, Facebook Gaming, and Nimo TV.

For the upcoming grand PMGC Finals, PUBG MOBILE Esports has announced Dubai, United Arab Emirates as the last stage for the 16 best professional teams that have qualified and will take place from 21 January to 24 January 2021. “Congratulations to all teams who have successfully qualified to the final stage. Again, we will show our commitment to provide a breakthrough in mobile esports events and present the best watching experience of esports tournaments for fans around the world. Witness and look forward to another surprise at the first PMGC Champion in Dubai,” said Gaga Li, Head of PUBG Mobile SEA Esports.

Additionally, in celebrating the success of six teams from Southeast Asia who qualified for the Grand Final, PUBG Mobile has conducted an event “SEA Teams are Fighting For You”. Where players who have supported the Southeast Asian teams during the tournament have a chance to get an AG X100 coupon and Supply Crate that will be sent to the player’s inbox on the game. Moreover, players can also get other attractive rewards, such as exclusive outfit on the “Fight For PMGC” #S.E.A.PRIDE event, by completing missions from 12 December 2020 to 3 January 2021. 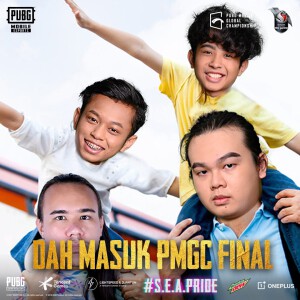