Exabytes’s CEO, Chan Kee Siak shared that ‘gamification’ is moving beyond pure entertainment purposes to a serious business nature. “Games have been a cultural mainstay throughout the computing history. Parallel to the increasingly significant commercial trend in games developments, CGM Game Jam also inspire Malaysia’s PC gaming sector to explore the opportunities in the gamification market.”

Badlisham Ghazali, CEO of MDeC said that ‘gamification’ is about applying game-design principles into non-game situations. “In fact, this gamification method is gaining tractions within the local business circle as a way to creatively more effectively engage their employees, customers and stakeholders.”

Ghazali further explained, “The potential power of such games-based applications and ventures is indeed magnified by the convergence shifts corresponded with the arrival of Generation Y and the overcrowding of the digital space – that makes it harder for companies to stand out from the market competition and forces them to apply gaming creativity for more effective interactions.”

The First Prize’s winner of CGM Game Jam 2013 is the team, Digital Ark, a year-old local startup company by Shah-Arif, Muhammad Aliff and Shah-Qays. Digital Ark’s team lead, Shah-Arif shared, “We are so happy to have won CGM Game Jam 2013 in Malaysia, and Exabytes did an amazing job organizing the rare sort of event which brings together so many great game developers, mentors and all levels of gaming enthusiasts like us. It was a privilege to speak with the professionals who shared how to capitalize our ideas for future commercial purposes.”

Each member of the winning team will receive a return ticket to Japan including accommodation to visit a few games development companies in Japan to explore the myriad possibilities of Computer Science, multimedia content development and other areas of interest and research under the leadership of International CGM Game Jam’s organizer.

In addition, the winning team is also given with 5000 cash credits of mobile network advertisement for promotion of their future game application, sponsored by tapsmart. 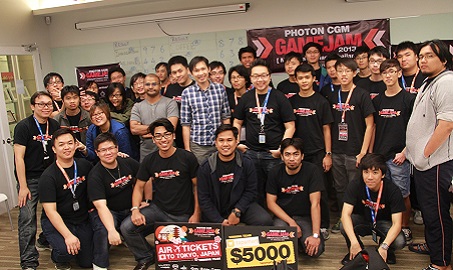